Celebrating 50 Years of the Zombie

When we decided to do a special feature and horror and zombie sound effects collection commemorating 50 years of the zombie, I got to wondering about the origins of the zombie horror film genre. So, I did what every normal person would do, I called my friends that work in the local healthcare industry. It’s only natural to find zombie experts in healthcare since we all know they’ve been searching for the elusive antidote for the infected for quite some time.

It was just as I suspected, those healthcare guys are bonafide authoritative zombie geeks. They promptly gave me the 411 on the lore of the undead and here’s a little of what I learned. 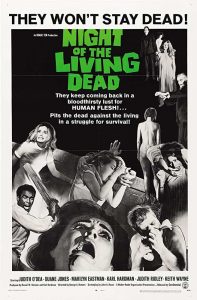 I’m told the origin of zombie lore starts with Haitian witchcraft and voodoo concepts. Of course the validation of such a claim is well outside the scope of my duties as a sound designer so I’m simply going to go with it. Like going with that 1950’s red-tailed hawk screeching sound for any breed of menacing bird in flight. It’s just accepted as accurate.

Dating back to the 1930’s, the movie White Zombie staring Bela Lugosi is a movie that has certainly influenced the foundations of the genre. Other films too supplied the fodder to build more zombie genre horror-able films :-). Examples: Creature with the Atom Brain (1955), The Four Skulls of Jonathan Drake (1959),  The Dead One (1961).

In more modern times, it wasn’t until the late 1960’s that zombie life (death?) would be formally codified. Little did we know that 50 years ago in October 1968, the world would get it’s best introduction to the undead. A non-Hollywood producer named George A. Romero would permanently define the zombie genre with his Pittsburg Pennsylvania produced zombie masterpiece, Night of the Living Dead.

I also found out that the true origin of the zombie sickness is in question. In some cases it was attributed to a curse or voodoo sorcery, others suggest the cause of a zombie’s infection was radiation or some sort of government chemical experimentation as in the Romero cannon. Though Romero never specifically gave a cause, subsequent zombie films of the 80’s like Return of the Living Dead were more overt in this explanation. I personally believe it’s a conspiracy between Hollywood and the healthcare industry. Neither industry has an incentive for a cure!

By the way, my zombie expert friends had no clue as to what zombies are supposed to sound like. Apparently there’s no stereotypical zombie sound or vocalization in the zombie lexicon. Sound designers have some real freedom for just making it up! As for the music in Night of the Living Dead, it was all stock library music. According to Romero on the album liner notes, Karl Hardman (a star in the film) used the Capitol Hi-Q (stock music) Library to put it all together. Romero wrote, “If the boogie man had a ghetto-blaster, this was the stuff he’d boogie to.”

More recently, the Wes Cravens 1988 film Serpent and the Rainbow once again had to do with Haitian voodoo and thus may have influenced modern zombie producers that followed. (Editors Note: By “zombie producers” I mean movie producers that make zombie movies not movie producers that act like zombies. I’m certain I needed to clear that up for you.) My zombie authorities tell me that the genre was reinvented again in 2002. Zombie 2.0 perhaps? Fast moving viral infected zombies were popularized in Danny Boyle’s film 28 Days Later. As you know, many other films, TV shows and an entire segment of the video game industry follow this trend today. 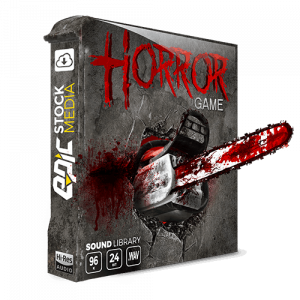 After watching the film, I keep wondering if perhaps Romero was somewhat influenced by the psychedelic film and art film genre popularized in the in the 1960’s? No matter his influences, everyone agrees that Romero set the standard and produced the most influential movie in the zombie tradition with Night of the Living Dead. Equally certain, zombie culture is an acquired taste and after 50 years, zombies are here to stay.

Today Epic Stock Media is pleased to celebrate 50 years of the zombie with the introduction of the Horror & Zombie Game Sound Effects Library. A fresh new generation of horror (and zombie) sound effects. No need to barricade yourself in an old farmhouse to keep yourself safe from the swarm of zombies outside. Our zombie sound effects library is totally safe for use in any studio, game or post production house. You won’t get infected. It’s perfect for your next zombie horror masterpiece. Use with caution and remember to aim for the head.

Our two favorite zombie movies and we must apologize, we are not hard core in zombie lore: Zombieland and Shaun of the Dead

Special thanks to our zombie experts we know in the local healthcare industry. These are links to their sites and to the work they do after hours, other than think about zombies.

This link will take you to an excellent resource about the music for Night of the Living Dead – aptly named Site of the Dead –http://siteofthedead.co.uk/night-of-the-living-dead-1968-soundtrack/

Check out commemorative screenings of the Night of the Living Dead now playing – https://www.fathomevents.com/events/night-of-the-living-dead-50th-anniversary

Celebrating 50 Years of the Zombie

0
View details
My cart
Your cart is empty.